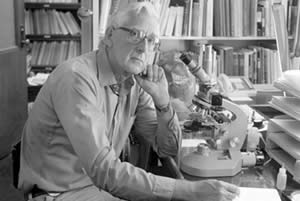 Proessor Korf, who has 16 species of mushrooms named after him including the local false morel Gyromitra korfii.

One of the most significant of Llhuros collaborators, Richard Korf, gave voice to Professor Nils Schilaneder, paleographer and director of the Swedish Institute of Archaeological Science and Research in Stockholm, and paleographer Phillip Ewing-Kershaw of Great Britain.

In 1970, Professor Richard Korf–a renowned Cornell mycologist and a long-time thespian in Ithaca–participated in a faux radio interview about an archaeological dig in Llhuros, skillfully portraying both the accents and personalities of the  academics. Don Martin, a local radio reporter for WHCU at that time, conducted the interview.

Here is the rare recording of the interview (script by Norman Daly) with Korf giving voice to both Schilaneder and Ewing-Kershaw: