The Rite of Stilt-Walking

Although we may regret their lack of historiographic interest which may be accounted for, in part, by the eloquent fact that the Llhuroscians were temple-builders but not mythmakers (given the widest screen for influence-projection and minimal scientific observance, mythographers fail to find any suggestion of even the common theme of dragon-slaying in Llhuroscian literature), the loss and subsequent uncertainty and confusion is overshadowed by our recognition of disturbing parallelisms. While there is no evidence, for instance, that the Llhuroscians wondered about their past eras or why they failed to inhabit their coastal plains, there is a remarkable continuity in their preoccupation with undeniable expiatory drives of abasement which strike the most vibrant note in our recognition of their similarity to ourselves — a recognition that renders them neither distant nor foreign. 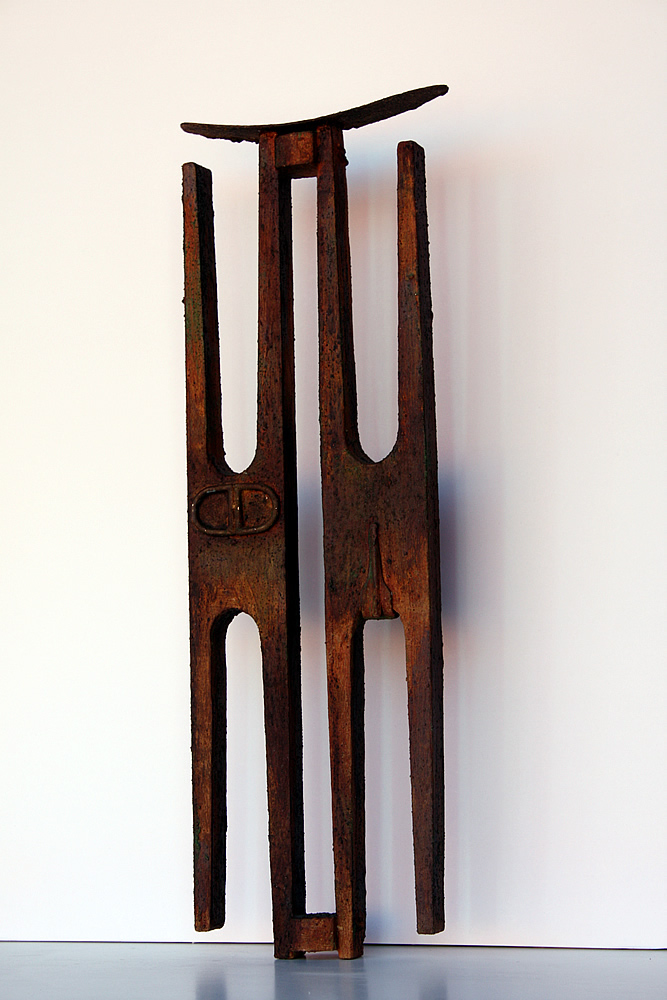 The Llhuroscians were inveterate ritualists who assiduously cultivated a brooding and possibly indelible guilt complex that could only be ameliorated by appeasing the gods through self-affliction. The ordinary outlet for such assuagement was found in the rite of stilt-walking. The orant figure on ceremonial stilts was not a creation ex nihilo but can be traced to “an expiatory need apperceived by the earliest Llhuroscians, and this need continued to be expressed as a rite and in the imagery throughout the entire culture.4 For example, see Petroglyph, Early Archaic, (top) and Section of Inner Wall from the Temple of Phallos at Trolydos, Middle Period, (bottom).

In the rite of stilt-walking, the pilgrim moved toward a shrine on uneven stilts and carried a bird on his head as an expression of contrition. The degrees of intensity of self-denial and masochism that determined the quality of contrition were gauged by the instability and height of the stilts and the size and waywardness of the bird. The supplicant’s vacillant tone of self-mockery and petty defensiveness and his heretical dubiety have an oddly familiar reverberation or contemporary reecho in these lines found at the Temple of Uoyab. They may bring to our mind the behavior of certain close relatives and friends whose self-imposed martyrdoms conceal destructive role-playing in family and social life today.

It is not easy to carry a bird on
Your head.
Especially when it is a big,
Big bird,
With its huge wings flopping.
It probably would be easier
If its wings were flapping.
But then, the bird would be
Flying, whereas
I am carrying the bird.
Or so it seems
That I am carrying the bird.
But maybe the bird is
Carrying me. oh, Oh,
Its talons dig into my ceremonial wig
And almost into my head
It would be much easier if
I were not on sacred stilts:
That makes it more difficult.
But we do not expect the way to
Akaslu to be without
Discomfort or pain.
We know our sins
Are less when the pilgrimage is
Not a lark.
This one is not easy.
It is not a lark.
It is a good pilgrimage.
I believe I am a good pilgrim.

Specifically referring to these lines, Professor Renshaw Fairchild Hamilton has made the following observation:
Often we make our aims in human relationships difficult to achieve by erecting barriers that block our progress towards such goals. In our eagerness to ensure our martyrdoms and to exploit our roles — be they as family member, father, mother, or off-spring, or as friend — we assume, metaphorically, burdens similar to those of the stilt-walkers. Our expiatory needs are satisfied by ingratiation. That is to say, gratuitously we extend excessive solicitude and sustain extraordinary attention in the affairs of others even though in so doing, we foster over-compliance in ourselves while forcing others into abject dependence. When we fail to observe what we consider to be proper appreciation, our wounded feelings are communicated overtly or subtly but sufficiently to alienate the recipients of our “goodness,” and invariably we call upon bystanders for recognition of our beneficence as well as a laudatory assessment of our role-playing. If an extrinsic commendation is not forthcoming, our sense of the immanence will not deter us from personally issuing the appraisal.5
4. Silvio Gian Terracini, “Metodi strutturali critica litteraria Llhurosciana,” p. 419.
5. Renshaw Fairchild Hamilton, “Counteraction of Narcissism in Llhuroscian Liturgy,” p. 73.
« Literature and Liturgy  | Ceremonies and Rituals »
Go to top