When the venerable Biennale de Ven­ezia temporarily collapsed under the pressures of inflation, installation prob­lems and Italianate dissensions, Pro­jekt ’74, though not planned to do so, became for this summer the main Euro­pean showplace for a display of the latest art models produced in the auto­mobile-enslaved societies of the West­ern world. Proclaimed by the large posters bearing the image of a sunset sky and the simultaneously defensive and didactic phrase “Kunst Bleibt Kunst” (Art Remains Art), Projekt ’74 was predicated on official reverence for esthetic innovation. As trained art historians, the five curators of Cologne who organized the exhibition took for granted their role as prophetic advo­cates, endowed with an inherent re­sponsibility to seek out and encourage advanced art of the ’70s, thereby pro­viding a steady flow of fresh “old mas­ters” to be, instant-art history books.

The exhibition also embodied the popular curatorial view that the proper function of a museum is to call into question not only the nature of art but its own cultural mission as well. Given the orthodoxy of these preconceptions, it was not surprising that Projekt ’74 provided a predictable array of proc­esses and styles that have already been sanctioned by the international art establishment and are now familiar fare on the American college art cir­cuit. Except for the inclusion of Norman Daly’s “Civilization of Llhuros,” which is in a class by itself, and the introduc­tion of what, may be called “anthro­pological art,” the exhibition suffered from the common 20th-century museum fixation–an indiscriminate hospitality toward whatever is thought to be new and chic.

Projekt ’74 abounded in fun house displays that depend on energy con­suming electronic gadgetry. One wing of Cologne’s Kunsthalle was a veritable jungle of extension cords, cables, pro­jectors, loudspeakers and TV sets. These devices filled the air with those ubiqui­tous sounds that have become the leit­motifs for such displays, the steady clicking changes of the automatic slide machines, the mechanical drone of the stereo speakers, and, conversely, the blankness and stubborn silence that ensues when those temperamental contraptions go on the blink. These amusement park shows made varying demands on the patience and interest span of the observer. Bruce Nauman’s minimal creation, consisting of a long narrow corridor terminated by a TV set that projected a diminishing pros­pect of the viewer’s backside as he walked toward the luminous box, re­quired very little perceptual effort, though it might have been quite an anatomical feat to reverse the procedure. Equally undemanding was Murray Fauro’s clacking wooden contrivance that humped and undulated a white sheet, while one of the omnipresent projectors sprayed moving pictures of incoming surf over its heaving surface. More complicated environmental shows enveloped the viewer with distracting visual stimuli and insistent aural as­saults. While it is claimed that these automated multimedia environments engage the observer as a participant at a heightened state of awareness, it seems to me that they merely use him as a passive recipient of given sensa­tions. Once their momentary titillation has been experienced, they abandon him to the contemplation of intolerably repetitious reruns. 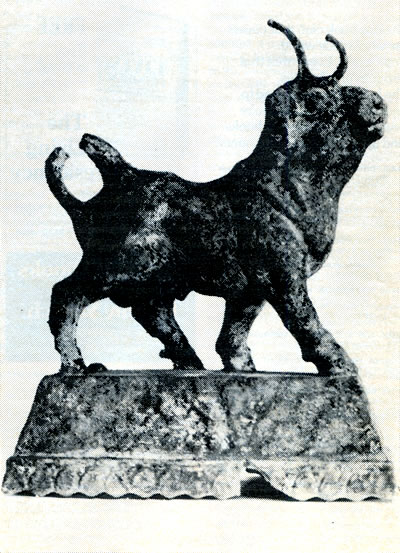 In contrast to these 1984 Big-Brother displays, certain conceptual exhibits made inordinate demands on the mind and body of the viewer. It seemed downright inhumane to expect the willing Kulturhund, already beset by museum visitor’s aching back and tired feet, to stand for hours on end and read through an abstruse volume like “Problems in Analysis,” as offered, accompanied by one esoteric chart as the sole visual element, in the concep­tual exhibit “A Symposium in Honor of Solomon Bochner.” And what visitor would be inclined, even on a grey, rainy day in the Rhineland, to with­draw from the compulsive progress of exhibition sightseeing into one of the four windowless cubicles, each with an identical enigmatic chart, and study highbrow treaties on “Anthropological Art” or “Concept of Culture,” as pre­sented in Joseph Kosuth’s creation?

These are hard times for revolution­ary art. In that bastion of the revolu­tion, the Soviet Union, modest efforts to explore and exhibit the possibilities of abstract art are set upon by author­ities driving bulldozers and street­-washing machines. But in the capitalist nations of the “free world,” radical movements are immediately spotted by alert dealers, art magazines, museum directors, and promptly gobbled up by capitalists who then convert the radical creation into a status symbol to be ma­nipulated as one more commodity on the world market. Most artists are eager to participate in this process, but one contingent of Projekt ’74 seemed de­termined to resist. Their tactic was to produce works that were either so transitory or so complex and unwieldy that they defied easy acquisition and conventional display.

In addition to this subversive stance, they also eschewed the abstract formal­ist dogmas and restrictive iconography that have dominated the art world for the past 30 years. Although their ap­proach led them into the peripheral re­gions of anthropology and archaeology, their evident goal was to restore human subject matter as the focus of their crea­tive efforts. This resulted in straight anthropological exhibitions, like the Poirier s study of an African tribe or Christian Boltkanski’s amusing and affectionate exhibition of photograph­ically recorded activities, actual worldly possessions, and visual creations of a French school child. Most impressive of these quasi-scientific exhibits was Ni­kolaus Lang’s presentation of archaeo­logical remains found in an abandoned German farm house. Old clothes, toys, tools, photos, worn shoes and other family relics were perversely displayed in stylish, Arp-like, free-form enclosures or laid out on immaculate white sur­faces. In addition to human artifacts, Lang’s exhibition included a collection of desiccated martin turds, found on the site, artfully arranged to resemble an obscure alphabet, and a display of the remaining fur and bones of a dead rab­bit that had been suspended in a sling over a nest of ants. The swarming deci­mation of the animal’s carcass by the insects was sequentially recorded and then displayed by the artist in a series of still photographs. Beyond the gratui­tous shock of this nasty bit, Lang’s ex­hibition of abandoned and recovered relics of a human family had that poign­ant appeal to fellow feeling, spanning differences of time and place, that is characteristic of archaeological exhibi­tions in general. Even though Lang’s design lacked the formal and conceptual synthesis to match the appeal of his found objects, his work reinstates hu­man content at the center of the visual arts.

Evidently the organizers of Projekt ’74 shared the fashionable view that the art of painting on flat, bounded surface is kaput; their token examples of that an­cient art form seemed calculated to sup­port the assumption. A few perfunctory abstract expressionist splatterings from Italy, mixed-media canvases carrying a weight of words that made them more literary than pictorial, a few mechanical graph-paper abstractions and a group of the worst examples of that mindless American phenomenon, photo-realism, represented the traditional visual arts at Cologne. Serenely remote from these manifestations and the pervasive side­show atmosphere at the Kunsthalle, Jan Dibbets’ soaring collage arc, with its poetic evocation of time, space and si­lence suggested that there still may be some life left in the old two-dimensional format after all.

Norman Daly’s “Civilization of Llhu­ros” (first reviewed in these pages) was a major component of Projekt ’74 and gave the exhibition its greatest distinc­tion. Occupying the entire first floor of the new Romisch-Germanisches Mu­seum, which is near Cologne cathedral and shares an expansive piazza with that relentlessly vertical structure, Daly’s exhibition was carefully calculated to exploit the juxtaposition of the muse­um’s authentic Roman archaeological remains and the fake antiquities of his own imaginary civilization. Obliged to cope with this puzzling congruence, the hordes of international visitors who made their way through the traps and multilevel ambiguities of Daly’s con­ceptual creation with only a German­-language catalog to guide them, may have missed much of the wit, poetry and contemporary social relevance of his remarkable work. However the visual impact of Llhuros survived the transatlantic crossing. While those haunting images of a society that never existed are strangely expressive of the neurotic phobias and erotic preoccupa­tions of our own culture, they are also designed with fine proportions, coher­ent sequences of contour and shape, sensuous surfaces and inventive formal surprises. Those attributes give real meaning to the slogan “Kunst Bleibt Kunst.”