The first exhibition of The Civilization of Llhuros took place at the Andrew Dickson White Museum of Art at Cornell University, Ithaca, New York. Following this installation, Llhuros was exhibited in several other U.S. venues. Here are some excerpts of reviews written from 1972-1973. 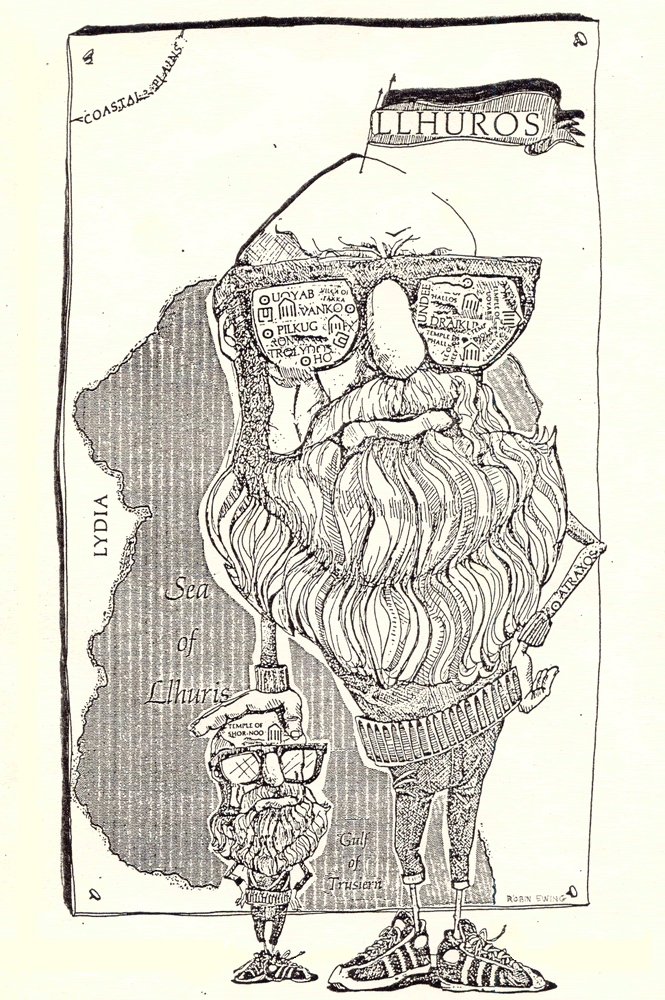 “Daly has invented a mythic civilization complete with artifacts, remains of sculpture and painting, rituals, poetry,’music, games, ornithology and a group of international scholars who are experts in the field of Llhuroscian studies … At some levels, Daly is indebted to those writers from Swift to Borges who have invented imaginary societies in order to send messages back to the “real” world. However, as far as I know, he is the first artist to create a new culture and then flesh it with such a wealth of mores, sounds, literature and tangible artifacts … He (the visitor) is treated as peer, dupe and participant, but he is not encouraged to drift through as a passive receiver of sensations….. It is also impressive as a straight display of painting and sculpture. By the time the visitor has made his way through many cunning traps and surprises, he slowly becomes aware that he has participated in a unique and haunting aesthetic experience … If he is willing to engage in the complexities of Daly’s conception, he may discover the beauties of one of the most fascinating creations of recent times.”

“… an archeological magical mystery tour the like of which has never been offered before. Daly has fabricated the ‘remains’ of an imaginary, undated ‘lost’ civilization almost entirely out of industrialized debris of the Twentieth Century. The result is an outrageous spoof of archeological exhibits, a tour de force of craftsmanship and a provocative esthetic experience.”

” .. Daly’s conception of an entire civilization is realized on several levels. It is a game in which the visitor is invited to take an active part by suspending disbelief and embracing the fantasy evoked by Daly’s images and words. It is a spoof of the methods, jargon and pretensions of archeologists, anthropologists and psychologists. It is an invented context for works of considerable esthetic interest in their own right. And, finally, it is a disquieting reflection upon the rituals and practices of our own times.”

“It is a tour de force, complete with authoritative cataloguing and learned footnotes, ritual prayers in poem form, effigy chairs, human figures, scientific instruments, a mathematical computer – the artist even composed the ritual music which beats through the fantasy of Llhuros.”

“If Daly is not actually an anthropologist, he has done his lessons. This very inventive man and versatile artist has assembled a most fascinating environmental experience.”

“‘It’s fantastic,’ said Andy Currie of the Art Institute. ‘I think it’s the greatest exhibit, except for one, in the three years I have been at the Institute. ‘”

“Akron’s curator, Alfred Radloff, said the project is ‘far more than a joke, or we wouldn’t be showing it. We are displaying Daly’s artifacts as the handsome creative constructions they are, with the hope that this good-natured spoofing will awaken people to look and to discover, instead of accepting without question.’ If you can’t see it, buy a catalogue. It’s hilarious, but it also accomplishes what many museum catalogues set out to do but don’t; namely, to make you think.”

“Irishmen seem to have a penchant for recreating ancient myths to illuminate contemporary truths. Norman Daly’s ‘Civilization of Llhuros’ treads in the paths of fellow countrymen Yeats and Joyce who also created mythical landscapes for their art.”

“Llhuros is a world of its own in virtually every sense—an original springboard for expressing the artist’s perceptions, a lyrical relief to the mainstream of ‘fact and information art’ which has recently become prevalent in this country.

“His remarkable display, a parody of a museum exhibit of an ancient civilization, has drawn the most intense response that the gallery has seen in some time, so perhaps it was only natural that a personal appearance by the artist himself brought forth such disparate types as the two highest administrative officers of the University and the two largest cocaine merchants in the Capital District (presumably the former were not aware of the latter).”

“If Daly’s exhibition were only a spoof, it would not work as well as it does. It succeeds (I shudder at the thought of falling into the very trap that Daly has exposed) not only because of the totality of his idea and the completeness of his execution, but because the objects succeed as self-sufficient statements outside the context of the show. Their formal spatial and textural properties make them viable entities.”

“Men have chronically dreamed of enchanting isles, brave new worlds, past civilizations of Atlantis or Xanadu, and like all such visions, Daly’s is an implied commentary on his own world. What raises this particular exhibition above the level of museum in-joke or esthetic inspeak is the sheer size and grandeur of its conception.”

David Galloway
Author of Pioneer in in Art Collecting

“Norman Daly, inventor of that mythical — and now far-famed—civilization of Llhuros, talked in the Gallery’s ‘Leaders and Adventurers’ series. Daly has overshadowed all else one has heard about his considerable career. He is a man of wit, whimsy and scholarly attainments.”

“Norman Daly’s ingenious, imagined kingdom is really a biting commentary on all of us. There’s something for everybody — women-libbers, people who don’t like the ethics of some doctors or lawyers, people who feel smothered by religious strictures, people appalled by the maltreatment of the young, and, of course, people bemused by sex.