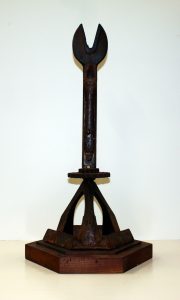 95 / Minature Model of the Temple of Holmeek [Home Votive]

The most complete description of a rite is given as part of the autobiographical writings of a Royal Mace-Bearer at Houndee. From his description, below, of a procession to the Temple of Holmeek it is evident that the society had been segmented into castes by the Decline. A merchant class trades in the bazaar which suggests something about the physical size and plan of the city; there is enough wealth concentrated in the hands of a few to make a class of beggars possible. There is a class of craftsmen represented by carpet-makers and candle-makers as well as religious castes represented by the Temple Virgins, the Holy Whores, and the Tomb Washers whose very young daughters are chosen by lottery as the darkdow and are starved to death in advance of this processional festival. (8) The following translation was made by Dr. Chai Lung Lee, director of the Institute of Paleography, Peking, China.
With low sweeping circles of sea gulls spraying the evening air with golden dung and calling the rab snakes to their destruction, the Sacred Procession of the Effigy Chairs begins with its Royal Noise-Makers pulling long carpets of invisible bells and shaking great bark-balls filled with crystallized sea foam, its Armless Women in shell tunics and feathered masks lurching in unison astride giant turtles, its fasting, penitent Bazaar Merchants stinking like a reservoir of sheeted bones, its sniffling packs of whining hound bitches clearing paths for Boy-Beggars whose blistered backs are covered with a salve of green pollen and locust legs, its naked Astrologers on miniature horses with manes plaited with live black eels and reading aloud from texts written on long, thin white leaves of the giant bestos plant, its Dwarf Monsters riding wheels of painted pottery tumbling and falling in the direction of the Temple, its white oxen crushing flowers and small birds as they bear forward the empty Effigy Chairs made of the skins of the rare Pruii stretched on tall grids of Viiben bones adorned with the blaze nests of the Night Birds and flaked with bubble milk of the sea cow, and at the end of the Sacred Procession come the black-teated Temple Virgins, festooned with bloody whipping cords and helmeted in meshes of stained ivory ringlets, released from their wet, grass cages, and, finally, the procession closes around the circle of the sighing parents of the darkdow, who step forward and silently watch sinless old Rope-Makers under tallowed, leather work aprons publicly sodomize the limp forms while the Tokens of Holmeek are lowered into the Sacred Fires, fed by the unborn of Horse People, and burned with the month-cloths of the Holy Whores.

Professor von Bleichmann sees this festival as an elaboration of the earlier fertility rites of the Late Archaic Period with human sacrifice added. The Tokens of Holmeek are lowered into the sacred fire instead of fish bones being buried in the earth; the darkdow are starved to death perhaps as a symbol of what would happen to the city if the gods visited it with famine as an expression of disapproval. In the ceremony, all things having to do with sexuality are blackened or burned (such as the unborn of the Horse People, the month-cloths of the Holy Whores, and the breasts of the Temple Virgins). This could be an elaboration of the symbolic coming of winter, or the return of spring.
Go to top
8. H. F. von Bleichmann, “Necrophilic Practices in Lluros,” Journal of Anthropological Arts and Sciences (London) March 1964: 92-113.
« Phallic Preoccupations | Crematory Rite of the Horse People »
Total Page Visits: 1360 - Today Page Visits: 3