Crematory Rite of the Horse People

The crematory rite involving the Horse People mentioned in the Royal Mace-Bearer’s description of the procession is not the only historical reference to these strange people. According to the high priests of the Pumice Cities, the Horse People originally were normal people who fished for a livelihood in the Gulf of Trusiern, long before the advent of the prophet Naimbo. Thaillus of Maydron writes in his Commentaries on the Horse People, Book III that Naimbo warned these ancient fishermen that all purple sea horses were sacred; when caught in nets, the sea horses were to be returned by the fishermen to the waters, unharmed. Under no circumstances were the sea horses to be eaten. 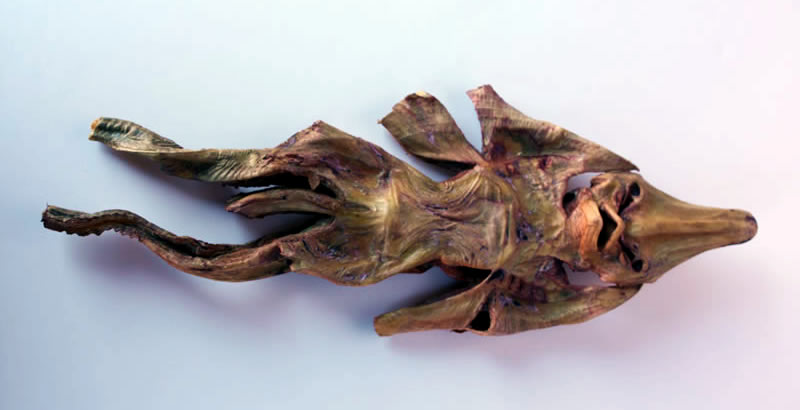 Almost as though it were foreordained by an evil force, the fishermen of the Gulf of Trusiern not only ignored these injunctions but actually developed an unholy appetite for the purple sea horse, and its flesh was relished by the young and old. Thaillus of Maydron writes:

Retribution was slow but inevitable. Strangely, the guilty fishermen and their families did not seem to be aware of their metamorphosis which came slowly and painlessly as though a summer’s cloud had passed over them, and it was not until Naimbo returned on a cyclical Redemption Rally that they discovered they looked not like Naimbo but like each other. When they learned of their physical change, they became too self-conscious to perform their daily functions as before. In awkwardness they put their hooves through the bottoms of their fishing boats, and could no longer row in unison. Finally, they were forced to seek their livelihood as beasts of burden and, as such, they were a caste lower than the orteths9, and the unborn of the Horse People were fed to sacred fires10.
9. Tomb washers whose daughters were regularly sacrificed in the infamous ceremony of the Tokens of Holmeek.
10. This cremation occurred in the ceremony honoring Holmeek.
« Necrophilic Rituals | Art in Llhuros »
Go to top