Much of our knowledge of the everyday life of the Llhuroscians is the product of the untiring efforts of Professor Nils Schilaneder, the brilliant paleographer and director of the Swedish Institute of Archaeological Science and Research in Stockholm. Indeed when clues became too tenuous, multiple, and diffused beyond the attentive application of those merely dedicated to the Llhuroscian field, Professor Schilaneder has analyzed material, partly with uncanny divination and wholly with extraordinary perception, that while physically available to others, in truth, was psychically beyond the reaches of most Llhuroscian researchers. Typical of his investigatory style are his remarks on the initiation ritual of a minor subcaste, the Nacirem Cult, an offshoot of the Malmusians, Middle Period.

In the corporeity of Llhuroscian writing there are few descriptions of an emotional ambience stimulated simultaneously by visionary fervidity and rendered impercipient by liturgical participation such as the following account of a Naciremian initiation ustulated [scorched] on the obverse of the arkphor (top figure) found at Houndee. The rite involved insobriety, animal sacrifice, and lunar worship.6 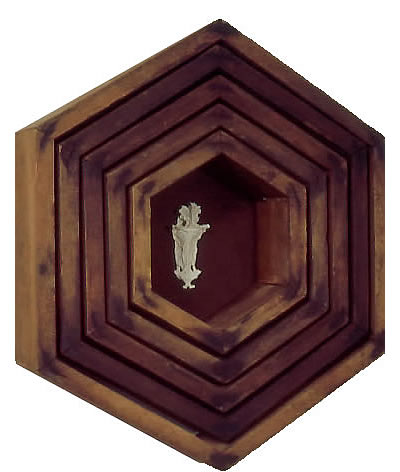 This ivory univell in a sexangular wooden ulbro was found in secular quarters at Draikum; therefore it is more reasonable to believe that it was owned by a wealthy aristocrat than by a high priest.

In a sacred fog the living things
Outline themselves,
Tense in dancing grief against the
Bright sounds and sudden smells of the Night silence.
Beyond the sleeping camp
Hunters encircle the spindling bones,
Anointed by smoking7 wines and
Shaken in coiled rhythms.
Inviting me to take the emptiness of
Cool feathers and drink the
Thick, orange blood, the
White eyes of the goat
Burn through fumes of lust
A lust
Hooked in blue darkness,
Spiraling down, down
Onto the bed of stone leaves.
The blood on its horns binds me
To a promise understood in wonderment,
And the uncovered moon
Wets me in an angry glare
Like a shrill warning,
Commanding that I pierce
The soft throat.

The sacred body oils used in that rite and all public ceremonies were kept in pitchers called trallibs which were commonly humanoid in form. The oil applicator or univell used in body anointing for public prayers was made of wood, ivory, silver, gold, or other metal in various images or shapes with rounded backs to lessen abrasive action. The univell was kept in a box called an ulbro. The ivory univell in the wooden sexangular ulbro was found in the secular quarters at Vanibo by Professor Schilaneder who thinks it is more reasonable to believe that it was owned by a wealthy aristocrat than by a high priest.
6. Nils Schilaneder, Lebende Symbole der Llhuroschen Kunst and Kultur, pp. 125-26.
7. Most Llhuroscian scholars agree that the vinous fermentations of these sacred wines were too powerful to have been drunk, and there seems to be strong evidence that the Llhuroscians imbibed their ceremonial wines by inhaling the steam of the beverage as it was thrown onto fiery stones. Professor Schilaneder has translated

as “hissing” (ibid). The author prefers to translate

as “smoking,” because it implies transitive action on the part of the celebrants of the ritual.

« The Rite of Stilt-Walking | Phallic Preoccupations »
Go to top