“I was armed with musical ignorance, therefore I composed.”

The nasal flute was said to be notoriously challenging for musicians

Music is an integral component of The Civilization of Llhuros, which was explicitly presented as a multimedia exhibition. Each musical element is intimately woven into the complex web of visual and textual themes that define “Llhuros”.

The original audio recordings, on reel-to-reel tape, dating from the early ‘70s, were gradually converted to digital format in the years between 2014 and 2020. Several recordings contain mainly source elements, but the most recent conversions are considered to be the actual music tracks assembled for the initial exhibitions in the early ‘70s.

During these large installations of “Llhuros,” separate, but adjoining exhibition galleries, each featuring a musical soundtrack, were required.

Following are two sets of musical tracks from this period:
Please note: there is a slight delay before the sound begins

On Composing A Musical Theme 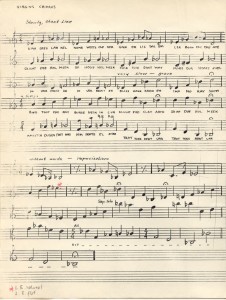 “It was very painstaking, since I don’t know anything about music. I first wrote a theme and I wanted something rather schmaltzy. What I also wanted was something very poignant, but I wanted it not as a funereal dirge. I wanted it played fast but I still wanted it to have a sadness, that real schmaltzy nostalgia about it. So I wrote a theme—a very simple little tune—and then electronically it was altered with Moog’s synthesizer sufficiently so that it didn’t sound as it had been originally conceived just on the piano. Then I made variations of that theme and had some singers do some choral work on it as well as some children of the sixth grade sing part of it.”
—Norman Daly, from Interview with Thomas Leavitt