“This week finds us at an excavation site near Atraxos, an ancient city in relatively inaccessible Llhuros, a little-known culture…” 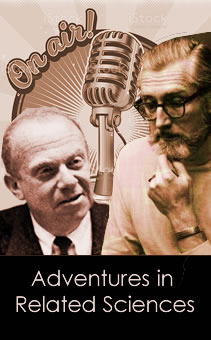 In 1972,  Alan Holman,  host of the radio program ‘Adventures in Related Sciences’ broadcast an international radio episode on Llhuroscian culture at a busy archaeological site. Professor Nils Schilaneder, paleographer and director of the Swedish Institute of Archaeological Science and Research in Stockholm, and paleographer Phillip Ewing-Kershaw of Great Britain joined Mr. Holman in a nearby temple for an impromptu interview.

This interview was conceived of and written by Norman Daly as an element of “Llhuros.” Richard Korf was both professorial and poetic as he gave voice to the two enthusiastic scientists. Moderator, Alan Holman was played by Ithaca radio personality, Don Martin, of WHCU.