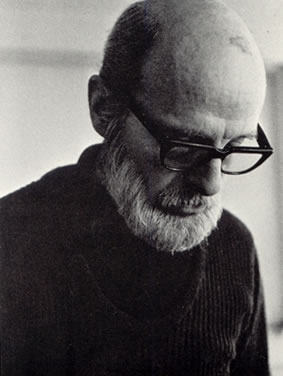 Norman Daly, a native of Pittsburgh, received his training in fine art at Carnegie Tech, the University of Colorado, the University of Paris, and Ohio State University. He also did graduate work at the Institute of Fine Arts of New York University. After teaching briefly at Oberlin and Rutgers he joined the Department of Art at Cornell University, teaching painting, drawing, and elements of design from 1942-1999.

His career as a painter, with regular exhibits in New York City, and acquisitions of his work by museums, flourished in the 1940s and 1950s. In the 1960s he turned to sculpture, concentrating on assemblages and a series of of carved marble bas reliefs. This work led directly to his conception of a complex “imaginary” civilization, the manifold productions of which constituted ultimately a multi-media installations. The Civilization of Llhuros was a monumental creation and the first and still preeminent presentation of archaeological art. This work was exhibited widely in the United States and Germany in 1972-1975, and was sampled for a small-scale review exhibition at the Herbert F. Johnson Museum of Art, Cornell University, in 2004. 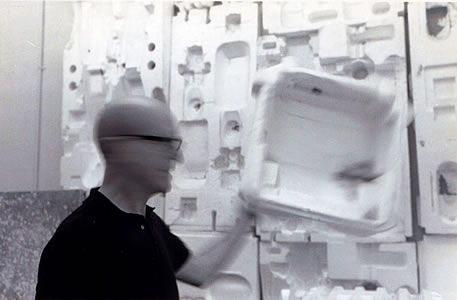 Norman Daly in his studio with a piece of styrofoam such as those which comprised the temple door in the background.

The central motif of all of Norman Daly’s work was the mythic figure, usually human, sometimes animal, and always transmuted by a wide range of abstracting techniques so as to honor found values. In addition, his work was deeply inflected by homage to the Native American and Spanish-American visual cultures of the Southwest. Finally, in the Civilization of Llhuros, Norman Daly’s unique imagination succeeded in uniting an ever-delightful particularity of visual content with a universality of thematic concerns to produce an unprecedented experience of pleasure, mystery, and thought provocation.