Norman D. Daly died at Cayuga Medical Center on April 2, 2008 after a very brief illness. A resident of Ithaca since 1942, he had lived at Kendal for the past three years. He was 96 years old. 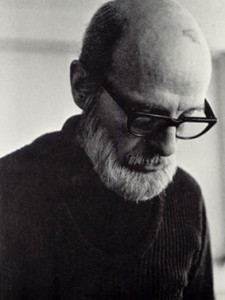 Born in Pittsburgh, PA on August 9, 1911, the youngest of seven children, he was the son of James A. and Rose (Owens) Daly. He attended school in Pittsburgh and started painting and drawing as a teenager in evening classes at Carnegie Tech. He majored in art at the University of Colorado, graduating in 1937, studied in Paris on a fellowship in 1937-38, and received an M.F.A. from Ohio State University. He married Helen O. Gebbie of Lockport, NY in 1942. He taught painting and drawing in the Department of Art at Cornell University from 1942 to 1999, the last 24 years as Professor Emeritus. He was the first recipient of the Hartell Award for distinguished teaching in the College of Architecture, Art, and Planning.

He began exhibiting his paintings in New York in the 1940s. In the 1960s he became interested in sculpture, working mainly with assemblages and marble carvings. This sculpture was the starting point for his most extensive project, the creation of an entire ancient civilization called Llhuros. Combining aspects of conceptual art with a determined attention to traditional aesthetic values, Llhuros came to be recognized as the foundation of “archeological art.” The project was exhibited widely in the United States and Germany in 1972-1974. Elements of Llhuros were included in a retrospective of Norman Daly’s work at the Johnson Museum at Cornell University in 2004.

He was known for the diversity and intensity of his interests. He had a special ability to inspire his many friends with confidence in their own capacities, and he impressed upon each of them the pleasure he took in their ideas and lives.

He is survived by his son David Daly of Ithaca; granddaughter Patti Mulcahy of Wappingers Falls; nieces Rosalie Stevens of Phoenix, Patricia Linder of San Jose, and Alice Witt of San Luis Obispo, CA; numerous great-nephews and great-nieces; and friends Elizabeth Cornell of Asheville, NC and Brother David Steindl-Rast, O.S.B. of Ithaca. He was predeceased by his wife Helen, for whom he cared devotedly throughout the years of her illness, and his younger son Nicholas Daly.

A memorial event is being planned for sometime in June. Bangs Funeral Home is in charge of arrangements. Memorial donations may be made to a charity of one’s choice.